How We Ended Up Adopting a 19 Year-Old

It's the 4th of July weekend in America, but we are celebrating something completely different.

Today, July 3 is the anniversary of adopting our son Immanuel.

We call it ‘Dependence Day’. 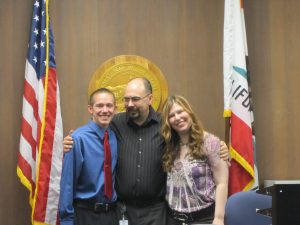 I’ve wanted to adopt since I was in college, but I thought it would be a young girl from India. I never imagined it would be a 19 year-old teenage boy from America!

My husband Daniel and I were a ‘Mom and Dad’ for students on a ministry school, so we decided to open up our home for those who didn’t have anywhere to go on Thanksgiving. The only thing was in our thirteen years of marriage, we’d never made Thanksgiving dinner! We met while I was living in Northern Ireland, and with him being English and us living overseas, we never got into the habit of really celebrating the day. Even when we moved to America in 2006, we still didn’t cook a turkey dinner. There was just the two of us, and I’m not a big fan of turkey anyway, so why get up at a crazy early hour to make one?

But one of the students, who loved cooking, offered to help us make the dinner. So we figured we’d be okay.

Then she got sick the night before.

That night, we also got a message from a family friend, asking if he could bring his friend Immanuel. Sure, why not. The more the merrier. We can do this, right?

By the morning of, I was seconds from calling the whole thing off.

The turkey wasn’t cooking right. The sweet potatoes looked strange. We had a leak under our kitchen sink that would flood the tub underneath in minutes. Daniel would take everything out from under the sink, clean out the huge puddle of water and start again. This happened at least three times. Probably more. I was in tears on the couch planning to cancel.

But then I realized they were coming for an experience of family, not for the food.

So we made do and figured it out. In the end, even the meal turned out okay. (No one complained anyway.)

The thing I’ll remember most, though, was the moment of us standing between our kitchen and dining room talking to this kid with a beanie on.

He was telling us a little about his life. He didn't have a family. He wanted to move to Vacaville but needed a job first (but needed a place to get a job). He’d woken up with full amnesia three months before, not even knowing who he was. There’s a long story behind this all I’ll tell another day when I write the book. But what I remember was this amazing combination of vulnerability and strength. My heart was totally captured.

I wouldn’t have admitted it at the time, but I was thinking about adopting him.

Which was crazy. Never mind adoption, I wasn't even sure I wanted him to move in with us.

We’d either had people living with us or we were living with someone else for the six years we'd lived in America. We were ready to have time to ourselves before I would hopefully get pregnant (we’ve been wanting kids for 13 years now). I felt for the kid a lot, but our last guest had just moved out. We were ready for some space.

For the next couple of days, though, I couldn’t get that moment out of my head or that kid out of my heart. I was thinking about him everywhere I went.

I finally went to Daniel and told him about my affection for Immanuel and how it didn’t make any sense. Turns out he’d been feeling the same way.

For the sake of brevity, here’s edited highlights of what happened next (yes, I promise, I’ll write the book someday soon)…

On December 21st – one month after Thanksgiving! – we got a call from the friend who introduced us. He was asking if Immanuel could spend the night. The place he was supposed to stay fell through and there weren’t any buses home. We were delighted!

Over the next month, he stayed with us the occasional weekend. I remember one moment where he was kneeling on the ground measuring a box for me. I was looking at the top of his head thinking how much his family was missing out on this amazing kid. No animosity towards them – they didn’t have the tools. And selfishly, their loss was my gain!

We celebrated with him his first Christmas and New Year’s since waking up (and later got to celebrate all of his ‘firsts’).

By mid-January, it seemed silly to have him going back and forth from here to there all the time. And we missed him when he was gone. So we asked him if he wanted to move in with us. He had a miniature pinscher chihuahua who was with him when he woke up from the amnesia, and he was very attached. I was absolutely TERRIFIED of dogs (no matter the size), but I knew she was part of the package. Out of love for him, I told him she could move in too.

January 29, 2013, he moved in. Two days before my birthday. Best birthday present ever!

A week after, once we got Immanuel settled, his dog ‘Supergirl Smoogie’ joined us. She barked like crazy, and I was thinking maybe this wasn’t such a good idea! Turns out, she was actually barking at Daniel – she hadn’t been around adult males much. I’m super attached now, and my lap is her favorite place to sleep!

On the Saturday morning before Easter, I woke up thinking about adopting Immanuel. I wasn’t even sure you could adopt an adult! Turns out you can. The process is simpler in some ways – since he’s over 18, it just takes his and our consent – but there’s also no forms you can fill out, so Daniel had to draft legal letters. On Easter Day, we asked Immanuel if he wanted to be our son. It was one of the happiest days of my life.

Daniel researched and wrote the letters (fortunately, he worked in a law office in his early adult years!)

In June, I waited in line at a free legal day at the library to have them look at our paperwork. I got there hours early and was the third person out of five available slots. Within minutes, all the spots were full. Daniel arrived after work to join me. The attorney looked over the letters Daniel drafted, and said they were better than some attorneys’ ones!

Daniel filed the paperwork in late June. We’d been told it could take months to get an appointment with the courts. When Daniel went to file, the first lady was grumpy and not much help. But then her boss sent her on lunch. Another lady stepped in who was amazing. When Daniel asked about how long it would take to get a court date, she offered him one a couple days later! It was too soon for us, but the next date was July 3rd. He took it!

On July 3, 2013, we arrived at the lobby outside the court room totally giddy.

Everyone else was somber and tense – the place was full of people dealing with divorce and custody issues. We tried to contain our excitement at first, and then finally decided forget it. This was a day to celebrate!

The judge was lovely and hugged us at the end. I think she was glad to be overseeing a happy occasion for a change.

As part of the adoption, Immanuel chose to change his full name. He is now officially Immanuel David Martin.

After the ceremony, we went for breakfast at Babs Delta Diner on the water in Suisun, not far from the court house. A very special breakfast on a very special day.

We are going back to Babs again this year to celebrate. We now have a fondness for that area by the water – we always think of it as the place we celebrated Immanuel’s adoption.

What amazes me so much about adopting Immanuel is that out of the billions of people in the world, we got connected with HIM – He is a mini-Daniel and is like me in some ways too. He could have easily been our natural kid. It's amazing!

People often tell us how awesome we are for adopting him. I know what they mean, but it doesn’t compute in my heart.

I never did this to be a hero.

I think (and often say), but we got Immanuel! (and he's amazing!) WE are the blessed and honored ones.