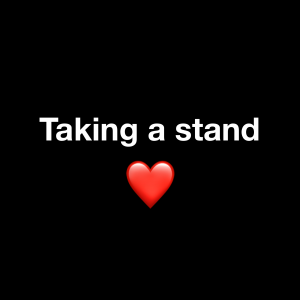 When I was in junior high, I had a friend named Angela Helmuth. Because we moved around on average every 6-9 months, close friends were rare for me. She was a close friend. We would often giggle together at lunch about those silly things junior high girls do. I often slept over at her house and we would talk about the cute guy, Aaron, from band class I liked, and whether or not he liked me. She would help me call him to find out, even though she was from a very poor family and they only got 7 calls a month included in their phone plan.

A few years ago, I found out from my mom that when I first brought her home to hang out at my house one day, she was surprised. Angela was Black. My mom was surprised I hadn’t told her. It never occurred to me to tell her. I didn’t look at Angela as Black. She was Angela, my friend.

I would have considered myself not racist.

But here’s what I’ve realized during these recent events following the death of George Floyd. Here’s what I realized after reading and listening and watching and examining my own heart.

It’s not enough to be ‘not racist’. I need to be anti-racist.

If I was Black, there would be times I wouldn’t be able to stand innocently in an aisle without being looked at with suspicion.

I’ve only been stopped by the police once in my life that I can remember. They pulled me over to let me know my tail light was out. I’d had no idea. He was warm and friendly. He said he just wanted to let me know so I could get it fixed.

But I’m a white woman. What if I’d been Black?

I don’t know what it’s like to walk in the skin of a Black person.

So here’s what I’m doing and I hope you’ll join me: (this is to the non-Black members of the CreativeWorldChangers community and anyone who wants to be an ally in support of our Black members)

The absolute most important thing we can do is listen and learn. There are a lot of things I thought I knew. I now realize there’s so much I don’t know about what it’s like to be a Black person living in this world. I need to put aside my assumptions, my defenses and just listen. One of those ways I’m doing this, is joining a town hall with Rachel Rodgers later today. I will be listening and learning about how to be anti-racist in my business. If you want to join us, you can go here – https://go.helloseven.co/townhall.

I will be voting differently from now on. I usually spend a long time studying the candidates and the propositions on the ballot. But now, I will also make sure I look at their stances and their policies and ask myself, are they anti-racist?

There are a LOT of great organizations out there helping Black communities. One I’m particularly passionate about and gave to is the Boris L Henson Foundation (https://borislhensonfoundation.org/) . They are a 501c3 and are giving free virtual therapy appointments to the Black community. You can donate on their website or text NOSTIGMA to 707070. Mental health matters for everyone. I want to make sure Black people are part of that everyone.

It’s not enough to silently support Black people. We must speak out. I don’t know what this all looks like. I’m still listening and learning. But I know I can’t be silent anymore. It’s my responsibility, especially as a white person, to be part of the solution.

This isn’t an exhaustive list. It’s a place to start. I hope you’ll join me in it.

One final note. This deserves a note all on its own. Not as part of a list. I want any BIPOC members of this community to know their voice is welcome. I am open to any suggestions for how we can do a better job of making space for you and your dreams. I’m here for you listening and learning. You matter.

Thanks so much for being a part of this amazing community!

Love and appreciate you sooo much!

1You can read our anti-racism statement in support of the BIPOC community here.

How to stop caring what people think

How to stop caring what people think