You can do waaaay more than you think you can! 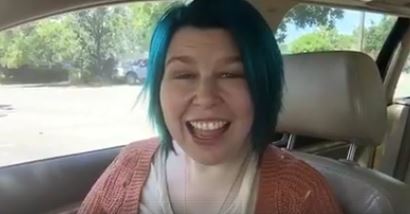 There are so many things that can look overwhelming and impossible.

For me, it was running non-stop for one minute.

As you might have heard, I'm doing something I've wanted to do for a really long time… training to run a half-marathon! I just started week two. Week one was walking for 3o mins four times (did 5 times. Check!) This week is walk for four minutes, run for one. Repeat for half-an-hour.

I'm not sure why, but I found the one-minute running part super daunting. I forced my clothes and shoes on and got in the car to go to the gym out of sheer will-power.

But here's the crazy thing that happened…

I'd downloaded an interval app on my iPhone…. walk for 4 minutes, run for 1. Never used one of these before, but thought it was really cool they have things like this in the world.

At the end of the 10 second warm-up, there was a SUPER loud fog horn to let me know to start walking. Some minutes later, I heard a quiet beep, beep, beep. I'm thinking, that can't be four minutes yet? I look down on my phone and it's counting down less than a minute. Oh, it must be a one-minute warning, I thought, so I keep walking. Soon, I hear the fog-horn blare again, so I start running.

I check my phone. It says I have just over a minute LEFT. Turns out I'd been running for almost 3 minutes! The beep, beep, beep, was to tell me to start running! At this stage, I figured, well, I might as well keep running the rest of it. So in the end…

I ran for four minutes!!

Me, who was afraid of running for one minute, just ran for FOUR!

For the next minute and the following four, I walked. Then I did the cycle like planned (walk four, run one) for the rest of the half hour. The funny thing is the one minute running now felt WAAAY too short!

The morale of the story is this… you can do waaaay more than you think you can. Really you can.

P.S. If you want to see the 3-minute video version of the story (with prayers for you and more), you can watch it here –

You can do waaaay more than you think you can!

The six words that changed my life